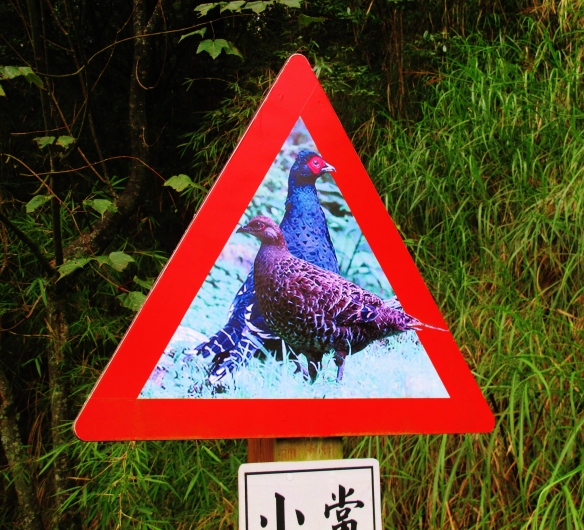 Warning sign at Dasyueshan Km 47. Unfortunately this was as close to Mikado Pheasant as I got, despite spending around four hours at the stakeout.

Birds seen (endemics and other notable birds in bold):

The three-day Moon Festival weekend presented me with the ideal opportunity to take a trip “up north” and fill in some gaps on my year list.

It was a highly successful trip, with many of my target birds seen. I particularly enjoyed Snowy-browed Flycatcher, Little Forktail, Brown Dipper and Taiwan Thrush. Notable misses included Mikado Pheasant, White-browed Robin, and Golden Parrotbill (although this species is easier in the Yushan National Park at Tataka). I didn’t see the likes of Taiwan Hill Partridge, Taiwan Shortwing and Taiwan Wren-Babbler either, but then again I didn’t spend any time looking specifically for these birds as I have already seen them this year. 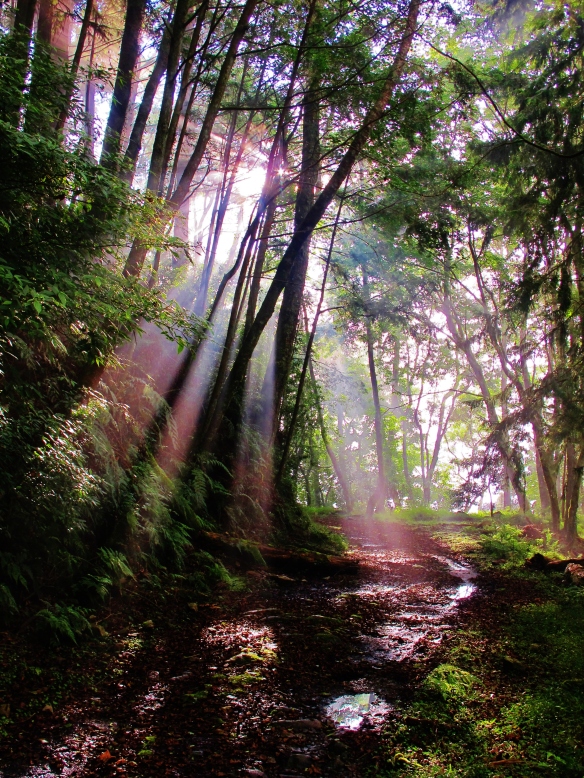 Notes on the sites visited:

Dasyueshan: I spent from the late morning until evening of September 6th, and all day on September 8th here. It is a very well-known birding site, with plentiful trip reports on the internet, but the following up-to-date information may be useful to some:

Km 4: immediately after the bridge, take the minor road on the left. Just around the first bend, turn left and head a short distance uphill. Scrub at the top had at least two singing Taiwan Hwamei at first light, one of which eventually showed well.

Km 15: a minor road heads downhill to the right. Follow it to the river, which is a popular stakeout for Brown Dipper. I found two here without a great deal of effort: one just downstream of the road bridge, and another a hundred meters upstream from the suspension bridge.

Km 35: after the main park entrance and parking lot, there is a small shrine on the left and a gated trail beyond. This is forest road 210. The locked gate and warning signs look intimidating, but apparently birders are tolerated here and it is possible to walk around the fence to the left of the gate. I had the place to myself on both of my visits. The first hundred meters of the trail were the most productive, where I logged about five Taiwan Thrushes (several of which flew down to the trail to drink from a puddle), several Taiwan Barwings and Rusty Laughingthrushes, and a Taiwan Whistling Thrush, all during a period of thirty minutes in the late afternoon. Further along, the trail was mostly quiet, but a feeding flock held a Yellow Tit. Judging from the habitat, there are probably plenty of Taiwan Wren-babblers and other undergrowth-dwellers along here; an early morning visit could be very productive.

Km 39: just before a sharp right-hand bend, a gravel trailhead on the right leads down to another locked gate. This is forest road 220, mentioned in some older trip reports as being a good place to try for pheasants. It is possible – but tricky – to wriggle underneath the gate. I was here in the middle of the day and didn’t see many birds, but a Formosan Serow a couple of hundred meters along the trail was a nice surprise. 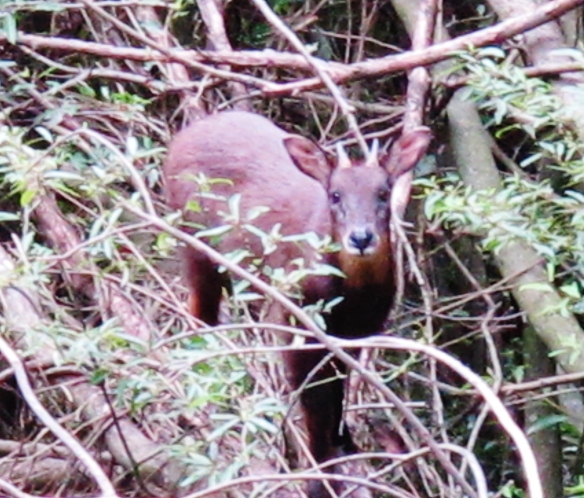 Km 41: a trail on the right leads through good forest to a waterfall, which is a good place to check for Little Forktail. I have also seen Taiwan Wren-Babbler and Taiwan Barwing along the first section of the trail, but not this time.

Km 42: a roadside waterfall worth checking for Little Forktail.

Km 43-44: Anmashan forest station. Below the road, around the cabins and restaurants, is plenty of good habitat to explore. You can also access a network of forest trails from here. My lunchtime visit produced just a Ferruginous Flycatcher and a Vivid Niltava in trees near the restaurant.

Km 47: the Mikado Pheasant stakeout. I spent four hours here over the two days, in the early morning and mid-late afternoon, without success. However, I did see plenty of high-altitude birds here including Flamecrest (many heard, good views of two birds), Coal and Green-backed Tits, Yellowish-bellied Bush-warbler, Taiwan Fulvetta, Vinaceous Rosefinch, Collared Bush-Robin, Spotted Nutcracker, and frequent White-whiskered Laughingthrushes. I’ve seen White-browed Robin in forest below the road previously, but unfortunately not on this trip – photographers stake out a spot beside the road for this species just down from the pheasant site.

Km 50 area: Tienchih Lake and the road summit. A Grey-headed Bullfinch was coming to seed placed by photographers next to the visitor center, and I saw another pair of these beautiful birds on the trail around Tienchih Lake. I walked the 1.7km-long trail down to the large sacred tree, where trailside forest looks good for Mikado Pheasant, and stands of dwarf bamboo might hold Golden Parrotbill from time to time, but I saw few birds except an unexpected migrant Brown Shrike.

Blue Gate Trail area: this is another spot that is well-covered in multiple trip reports. Turn left at the police station at Km 18 on road 14A, and park in the small parking lot on the right after 800 meters before walking the rather muddy trail. I was delighted to get good views of a male Snowy-browed Flycatcher along here, among commoner species.

Back on my scooter, I continued down the steep and bumpy road for another couple of kilometers before parking on the left shortly before a large but old and fully repaired landslide. Just after the landslide, take the right hand fork onto a minor road and follow it through mixed woodland and scrub as far as some tea plantations. On a previous visit this spot has proved productive for Fire-breasted Flowerpecker, Brown Bullfinch and Rusty Laughingthrush, but today only the flowerpecker obliged, although I heard – but didn’t manage to see – the bullfinch. I also had close perched views of an Ashy Woodpigeon, which was pleasing as all my previous views of this species have been in flight.

Tea plantations downhill from the Blue Gate trail, near Wushe.

Chun Yang Farm: this site near Wushe holds a range of mid-altitude scrub and forest-edge birds, but it was very quiet when I visited it mid-morning. I saw only Oriental Turtle Dove and Plumbeous Redstart of note, and overhead four migrant Chinese Sparrowhawks, a Crested Goshawk and two Crested Serpent Eagles. A disappointing visit, as I was hoping for Brownish-flanked Bush-warbler and Vinous-throated Parrotbill here. It’s easy to find the farm: from Wushe, take the right fork (road 14), and at Km 83.5 take the minor road on the left. There is an entrance sign saying Chun Yang Farm in English, and a gate, but the gate was open and there don’t seem to be any restrictions on access.

Beidongyenshan: a rather awkward to reach place, but worth the effort. At Km 4 on road 14A, take the left turn signposted Lishan. The road is in terrible condition and is marked by two big recent landslides, which were muddy and a little nerve-racking to negotiate in the rain on a scooter. After 8km, there is a green sign marking a turning on the left. Take this road, and after 1.5km park at the locked gate. It is possible to climb around the gate, and walk a wide and gently climbing track through excellent forest. The best birds were perhaps two Swinhoe’s Pheasants, a male and a female on separate occasions, but views of both were brief. I had much better looks at two flocks of Rufous-crowned Laughingthrushes, a speciality of this site, and two Yellow Tits in one of the few feeding flocks I encountered.

Bird of the afternoon at Beidongyenshan was on my return journey, when there was a smart Little Forktail at the waterfall next to one of the landslides – only the second time I have ever seen this striking bird.

White-whiskered Laughingthrush on the road at Dasyueshan Km 47, September 8th.

2 thoughts on “Dasyueshan and the Wushe area, September 6th-8th”