Coastal dunes and pools by the Qigu “lighthouse”, on an unseasonably cold and windy day

Today, I wanted to try out my two latest acquisitions: a new telescope (a Celestron 80mm spotting scope with 20-60x zoom, purchased for a bargain $150 on Amazon), and a scooter, which is a much more practical form of transport for birding than my Kawasaki Ninja. After a bit of fiddling around, I found I could fit not only my scope but also my new tripod under the scooter seat, making for a comfortable ride with only a lightweight pack on my back.

I left Kaohsiung early in the morning and drove north to Qigu, where my cheap telescope and tripod combo faced some unseasonable challenges: cold, windy and gloomy weather. My first stop was the Black-faced Spoonbill visitor center, but unsurprisingly the star birds were sheltering from the wind and were nowhere to be seen. At least there were some waders around: a single Terek Sandpiper (Taiwan tick), and plenty of Mongolian and Kentish Plovers, Common Greenshanks and Dunlins scattered across the mud. The most arresting spectacle, however, was the sight of more than 1,000 Caspian Terns roosting on the sandbar.

Leaving the center, I continued north and west along minor roads and eventually found my way to the Qigu “lighthouse”. This is a promising-looking area of scrub, dunes and pools, right next to the sea, and should be an excellent spot for migrants in April and May.

The best bird here today was a Cinnamon Bittern flushed from a ditch, only my second-ever sighting of this species (and my first in Taiwan). A juvenile Black-crowned Night Heron allowed a very close approach, and a Black-faced Bunting (an early migrant?) hung around a patch of scrub. Nearby, mud-fringed pools behind the lighthouse hosted 5 Black-faced Spoonbills, with 2 Pacific Golden Plovers and a scattering of Red-necked Stints among the Dunlin flock. Just to the north, 2 Sacred Ibis were around the fishing harbor. 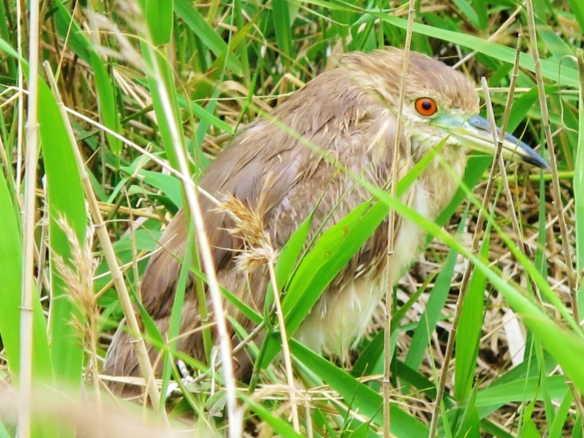 Given the less-than-ideal weather on the coast, I decided to head inland to the Pheasant-tailed Jacana reserve at Guantian. As soon as I arrived, I immediately spotted a small group of snipe on the left bank of the pool beside the visitor center. Most of them seemed to be Common Snipe, but one bird appeared a little different from the others, with a very wide buff supercilium in a plainer face immediately noticeable. Viewing conditions through the scope were pretty good, and over a period of about 30 minutes I was able to discern most of the ID characteristics of Swinhoe’s Snipe: the wide supercilium and narrow eyestripe, heavy build, and especially the plain buff-brown upperparts (lack of clear “braces”) which contrasted with very reddish-looking tail feathers.

According to the literature, Swinhoe’s Snipe is a regular winter visitor to Taiwan, but rarely does one get a decent opportunity for prolonged observation of snipes at close range which is necessary for a conclusive identification. So it’s a great bird to get onto the list.

There were plenty of other birds to be seen at Guantian. Among large numbers of dabbling ducks including Pintail, Eurasian Wigeon, Mallard, Shoveler, and Teal, there were more than 20 Garganey. 15 or so Pheasant-tailed Jacanas roamed the pools, there was a single Chinese Pond Heron, and an Emerald Dove flushed from the path.

The second highlight occurred when I had almost got back to the visitor center. I disturbed a small crake on a tiny muddy pool near the reserve entrance, which ran quickly into cover. I sat and waited and after nearly an hour, just when I was about to give up, a Ruddy-breasted Crake cautiously and very briefly peered out at me – a second lifer for the day capping an excellent visit to Guantian reserve.