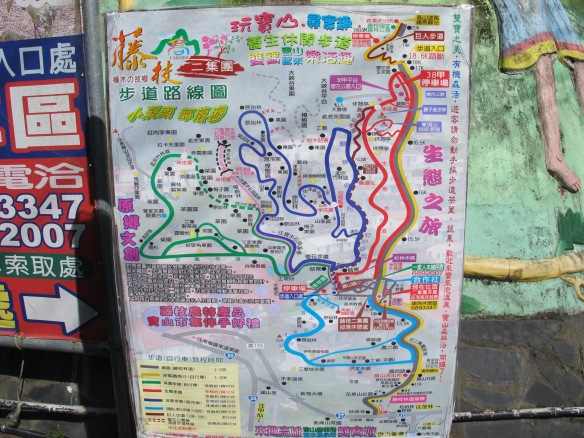 Map of the Tenjhih trails. My usual route is to walk north on the dark blue trail, then take the brown trail which winds up to the summit, then return south on the westernmost section of the red trail.

The promise of another clear, crisp winter’s day lured me once again to the mountains. I was on the road by 7.30am, pausing for a delicious Latte at my usual 7-11 in Meinong. I realised that I must stop here a lot, as the girl in 7-11 remembered my order. Next time, she’ll be brewing my coffee as soon as she sees me pull up outside.

Just outside Liugui, a quick stop was required when I spotted some large raptors overhead. They turned out to be Crested Serpent Eagles, 4 of them, spiralling up in the first thermals of the day. Shortly before the turning to Tengjhih, I had to stop again, this time for an Oriental Honey Buzzard gliding overhead. What a day for raptors it was already turning out to be.

On the road up to Tengjhih, I stopped at Km 5, just before the new bridge. I’ve got new, bright Kawasaki green rim tape on the wheels of my black Ninja, and I wanted to get some photos in the strong morning sunlight while the bike was still clean. There was a big flock of Japanese White-eyes here, and with them – moving through the bushes in characteristically heavy and sluggish fashion – was a single Arctic Warbler. A Crested Serpent Eagle was calling and later seen, and there was a beautiful blue male Black-naped Monarch here, too.

I parked in my usual spot, near the open-air market in the village at Km 14.5. The trail was quiet at first, but a bird perched on a bare treetop branch turned out to be a White-bellied Green Pigeon, a useful year tick. Today was undoubtedly the day of the Crested Serpent Eagle – a group of 4 more of them appeared, calling loudly, making a total of 9 seen today. Briefly accompanying them overhead was a Besra, a Taiwan tick for me. The usual feeding flocks of Taiwan Yuhinas, Taiwan Sibias and Steere’s Liocichlas were easy to find today, the yuhinas seeming to be particularly attracted to the beautiful pink tree blossoms that were in evidence at many spots along the trail. I took a slightly different route for a while, turning left and taking the green trail through some tea plantations, where the bird numbers were lower but did include at least 2 Korean Bush Warblers showing intermittently in an overgrown field. 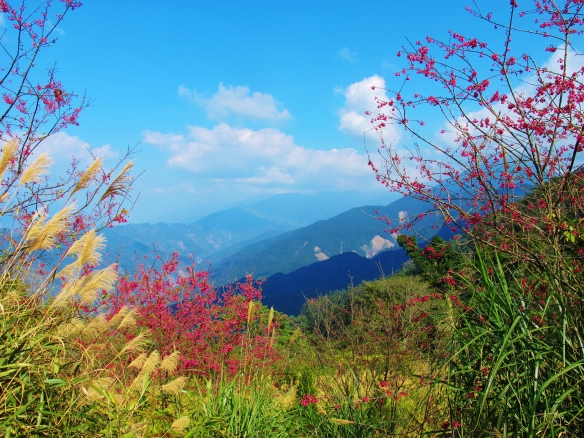 The pink blossoms at Tengjhih are beautiful and attract flocks of feeding birds, especially Taiwan Yuhinas.

Today’s highlight occurred on a short section of the blue trail. The vegetation here is unusually green and lush, and the bushes have been cut back along the trail to create a shady, damp, short-grass verge in places. It’s a reliable spot for White-tailed Robin, and I have also seen Collared Bush Robin here (but not today). My prize bird today was a Taiwan Shortwing, feeding unconcernedly out in the open on the verge, my best-ever views of this normally very retiring species. Naturally, it hopped away every time I almost got a photo of it.

Several hundred meters further on, just after the start of the brown trail, another bird feeding on the verge turned out to be a female-type Siberian Rubythroat – another excessively skulking bird that very rarely shows in the open. A great Taiwan tick for me, and a useful year tick … who knows if I will get the chance to see another one of these enigmatic birds this year.

As it turned out, I saw another Siberian Rubythroat rather sooner than expected …. a first-winter male (with shades of pink on the throat) by the first wooden platform rest area. It didn’t show quite as well as the first bird, but two Siberian Rubythroats showing openly on the same walk is exceptional indeed. Usually, these birds are of the often-heard-but-virtually-never-seen variety.

The now-expected Black Eagle showed near the summit, plus two fly-through Asian House Martins, while a Yellow-bellied Bush Warbler popped out of the bushes in response to my “pishing” calls – this species (and Taiwan Fulvetta) are both reliably summoned in this way.

The descent back to the village on the red trail was quiet until I had almost reached my bike, when a pair of beautiful Grey-chinned Minivets caught my eye, followed by the appearance of a large mixed feeding flock. At least 20 Black-throated Tits and two Green-backed Tits could mean only one thing …. that a Yellow Tit was in the flock somewhere! And, sure enough, there it was. It would be strange to come to Tengjhih and not have at least one sighting of this rare endemic, which seems to be very reliable here.

Driving slowly down the mountain, a Crested Goshawk on a roadside pole, and a female Plumbeous Redstart at Km 10 completed an excellent Tengjhih trip.